Step back
HomepageNewsblog #TegenKK: Against the use of the word "cancer“ as an insult
12.07.2021

#TegenKK: Against the use of the word "cancer“ as an insult

#TegenKK speaks out against the use of the curse "Cancer!" in the Netherlands. 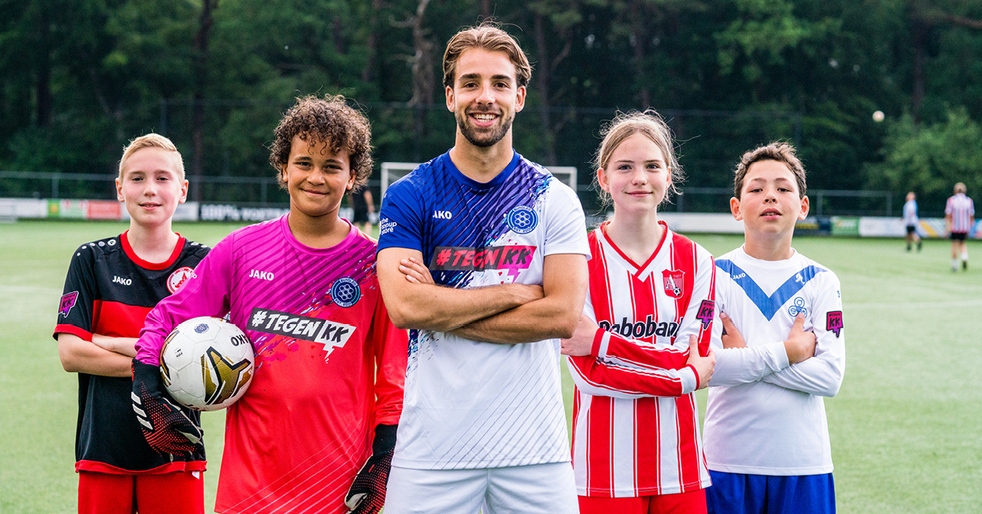 Cancer is not only a serious illness, but also an often-used curse in the Netherlands. On top of the already severe suffering, "Cancer!", pronounced in the environment of those suffering from the disease, can also cause severe emotional injury. For this reason, the Dutch Cancer Society KWF, together with the e-sports label "Bundled", has launched the campaign #TegenKK - the meaning of the hashtag loosely translated is: Against cancer!

Bundled has been a partner of our subsidiary JAKO Teamsport N.V. from Lier, Belgium, for a few months now. Together with Bundled, our colleagues have designed a jersey whose design gives shape to the message: #TegenKK. Our Belgians also designed a sleeve badge together with Bundled, with which football teams can make a strong statement.

Dutch YouTuber and e-sportsman Koen Weijland says: "I often host live streams that many young people watch and it's shocking how often the word 'cancer' is used. The same goes for comments on platforms like Instagram and Twitter. Considering that this is a disease that so many people are dealing with, it's safe to assume that these words hurt a lot of people."

Bundled and the associated e-sportsmen and YouTubers have a great influence on the behaviour of young people. E-sportsmen and e-sports teams are not only confronted with the campaign themselves. With their large reach on social networks, at e-sports events and in livestreams, they serve as multipliers of the #TegenKK message.

At events in the near future, the Bundled gamers will of course compete in the corresponding jersey. This is also possible in the popular football simulation game FIFA, where the jersey can be used as the kit of one's favourite team.

The sleeve badge, like the Bundled jersey, can be ordered by all sports clubs in the Netherlands via JAKO's Dutch online shop. A part of the profits from the sale of the sleeve badges and the jerseys will go to the KWF.

The campaign has already met with a positive response. In addition to various posts on YouTube and Instagram, several articles have already been published in newspapers, as well as a nationwide feature on Dutch television.